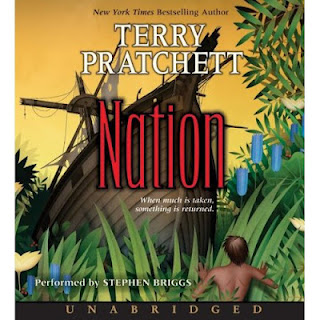 
Synopsis:
Mau had been getting ready to trade his boy soul in for his man soul when a tsunami destroyed his home. Coming back to carnage instead of a warm greeting from his village, he finds death and destruction... and Daphne.
Daphne had been on a Schooner at sea when the tsunami hit, breaking her ship upon the island. Alone and afraid, she discovers Mau burying his dead, and, after one attempt at foolishness, decides he's not so bad, and that they must communicate.
Together, they forge a friendship that will take them from childhood to adulthood, and surpass prejudice to form a Nation.

Character Likability:
Mau: Possibly the most conflicted character in this story, Mau has to deal with having no soul, having no gods, drowning out the voices of the past, dealing with the voices of the present and figuring out how to make a future. By having his people washed away, he finds out more about them than he ever would have had life continued on as it always had. He's a pretty heavy character, and often has to take on serious endeavors.
Daphne: An incredibly likable girl, Daphne had been sick and tired of her role in society...  so while at first she makes a hasty choice, she quickly realizes how wrong she was, and that now all the rules have changed.
Ataba: Foolishly holding on to the ways of the past, even though greater things are being uncovered all around him... rushing to keep those things hidden, even if it results in his death... he is an excellent example of what can happen when one closes ones eyes to the evidence around them and instead chooses to blindly follow what they have been told is right.
Other Characters: There are a plethora of interesting supporting characters in this story, all of whom are appropriately wicked, or appropriately pleasant. All of them are enjoyable.

Quality of Writing:
This work has been touted as some of Pratchett's finest... and while the topics are serious, often dark and much heavier than your normal Pratchett novel (honestly, Pratchett often plays with some heavy topics, but he manages to do it so humorously that you're able to laugh at the subject matter without being weighed down entirely by it... he often makes us laugh at ourselves before we know what we're doing) they are still interesting and the story flows smoothly.

Ending:
This one had a bittersweet but realistic ending.

Plot:
This plot deals with a lot of heavy issues. Religion, Individual vs. Society, Civilized vs. Barbaric, the transformation from Child to Adult and where exactly those boundaries lie... and who defines them. It plays with the concept of what actually makes a Nation, and with the ambiguity of defining things like that in the first place. The gods and adulthood are all very similar to the concept of 'Nation' in this novel, all of them being difficult to define. Daphne, herself, goes a long way to debunk a lot of the mysticism behind Mau's culture... when she works out that while there are traditions, like spitting in the beer and then singing the "beer song"... that really, the spit defuses the poison (the beer is poisonous unless it's spit in and sung to) and the song... well, it doesn't really matter which song you sing, so long as it's a specific length, ie, the length of time needed for the spit to react and de-poison the beer... there is a lot of that sort of thing in this book, and at the same time, there are magical elements that cannot be explained away through science. I don't think Pratchett was out to say religion is hokum and science can explain it all away, I think he was just pointing out that it's a wavering line and sometimes things that should be solvable with religion actually require science, and sometimes things that should require science really require some belief. Really, there is a lot to think about in this book, for those who care to really dive into what an author is trying to say... and for those who don't? It's still a really good, touching story about two people who have lost everything, only to find so much more.

Believability of World:
This is Pratchett's first non-Discworld novel since 1996... so a knowledge of his other works is not necessary. You can pick this one up and dive in, it is a stand-alone... and the world it exists in is an alternate version of ours, around the 1860's (It is mentioned that the Origin of Species was recently published)


Stephen Briggs does another fantastic job. This is the 3rd Pratchett book I've listened to as read by him, and they have all been amazing.