"Where is your favorite place to read? Curled up on the sofa, in bed, in the garden?"


I have a little love seat in my home, on this love seat, I have one of those pillows with the little arms that shoot out the side to prop you up. I lay on the love seat, my back against the pillow, my feet against the armrest on the far side... and end up in a slightly reclined, mostly sitting position, perfect for propping the book on my legs, perfect for hours of reading, perfect for sipping a nice warm drink as I flip pages, and perfectly spaced if a fluffy little kitty wants to come and curl up on my lap :)


What are you currently reading? Basically, what book is that?

I Shall Wear Midnight by Terry Pratchett

This is the last in the Tiffany Aching series featuring what are possiblly my favorite discworld characters, The Wee Free Men. Otherwise known as Nac Mac Feegle, known for shouting things such as "Ach, Crivens!" and "wailywailywaily"... they make me laugh out loud when I'm reading, and they issue complaints such as "Ach, I kicked meself in me own heed!" How can you not like such feisty little fighters? 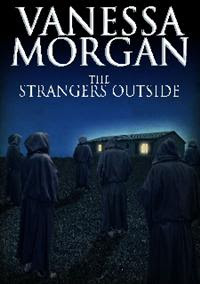 REVIEW:
The Strangers Outside
by Vanessa Morgan


Synopsis:
Two sisters, Jennifer and Louise, return to their remote holiday cabin after a day at the seaside. But little do they know they’re being surrounded. Shortly after their arrival, the girls will come face to face with THE STRANGERS OUTSIDE. When the assailants make their intentions known, things take ashockingly terrible turn and an intense battle for survival
will begin.

Character Likability:
Jennifer is an almost wholly unlikable character. She's down on herself, she's down on life, she's just down. She's also whiny and worthless in a pinch. You find out later she has more reason for that than you suspect, but still, she is a passive character, even in her own life.
Louise, the older sister, is much more likable. She's stronger, determined, and trying to make a better life for both her and her sister. She refuses to let negativity bring her down and is appropriately in shocked disbelief at the attitude of her sister.

Quality of Writing:
This was a fast flowing, action packed story. There were no lulls, there were no parts where I was just wishing the story would get on with it... it was constant action from start to finish.

Ending:
It was an interesting ending, but I would have liked to have seen either more back story on the events leading up to this (the bit about the psychics contacting people) or more alarm from the characters at the very end. I know these are the determined, decisive characters, but still, I wouldn't be willing to split up with the people I found after what had happened... and I certainly wouldn't want to go back to my house by myself!! I think the thing that threw me the most in the whole story was Louise saying she was just going to go home at the end. If you had really just escaped something so terrifying, could you really just decide to go right back again... alone?

Plot:
A very interesting idea, and something that could definitely be a longer story. The motivation of the Strangers is left unexplored and that isn't a bad thing. It leaves the reader wondering "Why?!" and admittedly, reflecting a bit on their own lifestyles and wondering if they'd be chosen too. I mean, I know I'm not as helpless and somewhat pathetic as Jennifer... but still... creeeeepy!
Setting the girls on vacation in an unfamiliar setting helped too, because it threw them off, they were unable to do exactly what needed to be done when it needed to be done, and it made sense as to why... it wasn't just one of those "Oh gee, I'm a lame scared girl" situations you see so often in scary settings. The description of the Strangers, also, was incredibly creepy. There is a line about them seeming to have faces that were too big... and it's imagery like that that just creeps me out in stories... when you take a human feature and describe it as "wrong" somehow.

Believability of World:
Believable. It was set in this world, and it felt like it. I could imagine looking out my own window and seeing the Strangers, and that's creepy.

Overall Grade: B- (This was a really fun, creepy read PERFECT for Halloween!)