REVIEW: The Search for WondLa by Tony DiTerlizzi 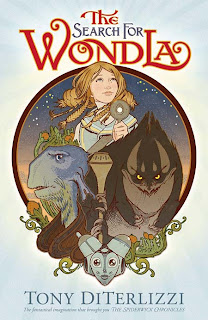 The Search for WondLa by Tony DiTerlizzi

***NOTE: There is an aspect of this book, where it references a literary classic, that I feel should be discussed... but would be a huge spoiler... so if you read this review, and have read the book, and wonder why I don't talk about it, it's because I don't want to ruin the reading experience for anyone else!***

Synopsis:
Eva has lived her entire life underground with her robot, Muthr. While running through countless tests to prepare her for the world above, it becomes all Eva can think about... being outside. One day, she gets her wish... but not in the way she had hoped. A Hunter attacks their sanctuary and forces Eva to flee, leaving behind all she knew... and discovering that everything she had trained for is completely useless... because the world above them isn't what the computer programs said it would be.