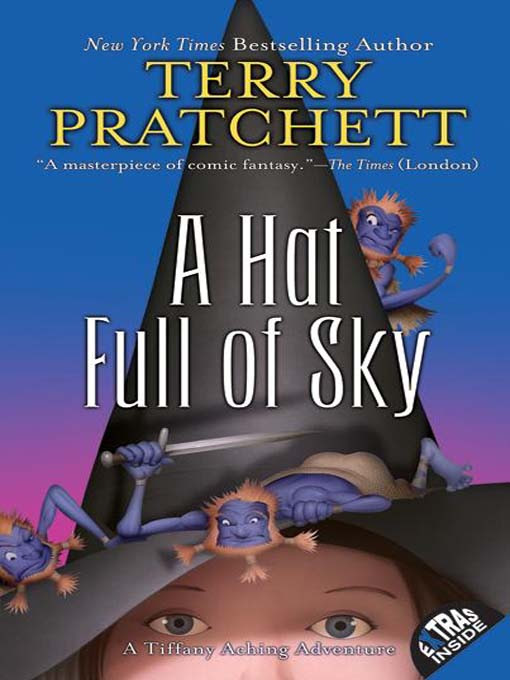 Synopsis:
Tiffany has begun her journey as a witch, starting out as an apprentice to Miss Level, a rather odd witch who usually drives her apprentices off through no fault of her own. Unfortunately, Tiffany's apprenticeship is disrupted by the arrival of a hiver, a parasitic creature that takes over a person's being and causes them to behave VERY badly. With the help of Miss Level, Granny Weatherwax and the unforgettable Nac Mac Feegle, Tiffany begins the battle of her life, to win her body back from the hiver.

Character Likability:
Tiffany: Tiffany is a determined, logical young girl who is 100% Pratchett Witch material. While Tiffany herself is not one of my favorite Pratchett witches (that would be Weatherwax and Ogg to name a few), she is likable, and the fact that she's supplemented by the Nac Mac Feegle helps to offset her seriousness.
Nac Mac Feegle: ACH CRIVENS! The Nac Mac Feegle are hilarious, and in each book in this series (especially in the audio versions) I found myself laughing out loud at them.

Miss Level: She's a very interesting witch and I am quite amused that so many young witches were frightened by her. I like her quite a lot.
Granny Weatherwax: Probably my favorite Pratchett witch... she is dead serious, but kind of nutty-goofy in her own way, and prone to kindness when it least suits her.

Quality of Writing:
I find that all of the Tiffany Aching series is fast flowing and entertaining... mostly because you can't wait to see what the Feegle do next!

Ending:
I love the solutions that Pratchett comes up with for his books. Sometimes I see them coming, and sometimes I don't... mainly because he often wraps them up in the lore of discworld, which is something I don't know!
This ending was no exception. It was clever, and allowed for another of my all-time favorite Pratchett characters to show up. Won't name any names though ;)

Plot:
First off, I LOVE Pratchett's ability to name his books. He'll probably always get a 5/5 from me on that. I've yet to see him miss the mark on the name. Hat full of sky refers back to Tiffany's beloved Grandma Aching... and actually, at one point in this audio... she says the line "When I am old, I shall wear midnight"... and I Shall Wear Midnight is the last of the Tiffany Aching stories, so I was quite impressed by the set-up.
Anyhow, this story begins with Tiffany getting ready to leave home so she can train to be a witch. Unfortunately, unbeknownst to her more experienced witch mentors, she has learned the trick of stepping out of her body... and at one point, when she does, something called a hiver comes in and takes her over. She is left to struggle with it internally, while everyone else is trying to figure out what is going on externally. It showcases some of Tiffany's power that even she has no idea how to use, and it plays on the themes of fairytales (as do all the Aching books) and making assumptions.

Believability of World:
If you're familiar with other works in the discworld series, then this is a very well founded world... same as if you've already read the other Tiffany Aching book before this... but if you're coming into this one without reading anything else, I recommend you put it down and pick up the beginning of the Aching series first. Pratchett has built himself a very complete and complex world, and you need a little background!

Stephen Briggs does such a wonderful job reading Pratchett stories! These stories have a girl as the main character, but having a man read them isn't off-putting at all. He does it wonderfully, and his representation of the Nac Mac Feegle is phenomenal. I had read this book before listening to the audio, and I think he does it 100% justice.


Overall Grade: A (The Nac Mac Feegle always make me laugh out loud reading these books, I think they're some of my favorite literary characters of all time. Even if you tried to read the discworld series and didn't like it... pick up the Tiffany Aching series. They're hilarious... and Stephen Briggs makes the Feegle sound so amusing!)
Posted by Heather at 10:44 AM