Teaser Tuesdays and a Manga Review

First up...
Teaser Tuesday!
Go here to join in: Should Be Reading

My teaser this week is from Zombies vs. Unicorns:

"They go off and grab the first thirteen-year-old who coos at them, and then it's all, 'Their purity will lead the way,' blah, blah, blah. Lead the way to a whole bunch of dead baby unicorns, maybe."

This excerpt was from The Purity Test by Naomi Novik...
which was one pretty amusing, funny story.

Now for the Manga review! 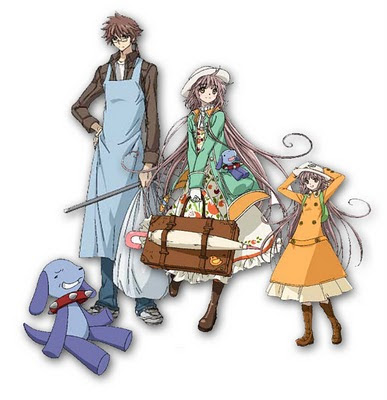 Synopsis:
Kobato is a mysterious young girl who has been assigned the task of healing people's hearts. She has a tiny jar that collects tiny stars when she is successful. She is accompanied by a stuffed pooch named Ioryogi... who is obviously more than he seems. She has tasked herself with healing the hearts of the employees of a local Kindergarden...
but finds herself doing so much more.


Character Likability:
Kobato herself is adorable. She's naive, sweet, caring and pretty much like an overgrown child.
You can't help but like her.
Sometimes I find Ioryogi a tad annoying... he goes from extremes of quiet to yelling... and his yelling is often over the top. He's no Kero... but he's not entirely unlikable either.
The other supporting cast seems likable enough, but this is only volume 3, and you don't know quite enough about them yet.
Quality of Writing:
Easy to understand and easy flowing, this text isn't a bother to follow at all, and isn't choppy. Words are where you expect them to be and the dialogue is natural.
Ending:
Since this is in the middle of a series, there is no true ending. Nothing is even concluded, and that really happens is more problems are introduced...
the equivalent of a TV episode cliff-hanger.
Plot:
In the third volume of this series, the plot becomes more in depth. There are shocking revelations and what seemed like a simple situation becomes increasingly more complex. Personally, I'm both interested in and excited by the added depth to this story.
Quality of Illustration:
CLAMP has my all-time favorite Manga Illustrators on their team... I think their work is so flowing and beautiful... the line work is amazing, the detail is amazing, and their knowledge of the human anatomy is amazing :)